Folklife was fantastic. I really want to thank all of the people that helped with this. Astrid and Mike King donated a beautiful AANR-NW banner. Many clubs sent gift basket items and pamphlets. We got great photos from several clubs. Thanks to Randy and “T” for the photo booth idea and to Snail, from Fraternity Snoqualmie, who painted two beautiful nude torsos that were a favorite photo op. Fraternity Snoqualmie lent us their festival booth. All of this went into having a great information booth. As many people remarked, we got great exposure. We will set much of it up at the AANR-NW convention at Kaniksu in July for you to see.
In particular, I want to thank the volunteers, and their sore feet, that manned the booth. People came from Idaho, Oregon and Washington. Thank you so much to Brie, Richard, Linda, Effie and Don. And to my husband, Jim, who helped assemble and take down the booth, spent four days in it and put up with me for the weeks while I was getting ready for it.

We talked to well over 2000 people. We talked to people from every state in our region, including Alaska. We also talked with people outside of our region. Some from as far away as Australia. That doesn’t include those that just took brochures. We gathered contact information from 198 people. 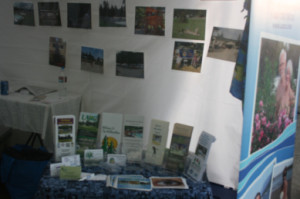 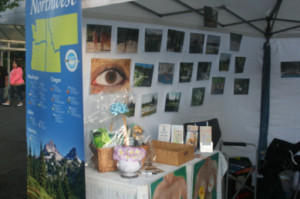 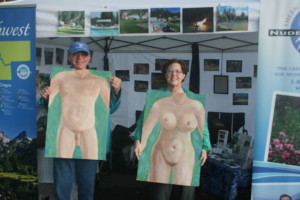 On the first and third Thursday of each month, AANR hosts a zoom to allow nudists to meet as a community. At each meeting, we try some new topics as suggested by our members. If you have topics you want to discuss, we will add rooms at the beginning of the meeting. Join us as often as you can every ﬁrst and third Thursday via Zoom at 8 pm Eastern, 7 pm Central, 6 pm Mountain, 5 pm Paciﬁc. Meet Fellow nudists and get a chance to chat. The topics vary, but have included subjects like Retirement Overseas, Nudist Filmmaking, New to Nudism, Let’s Chat, Nudism and Culture. Women in Nude Recreation.Music and Writing Contact sigs@aanr.com to signup.

The AANR Toastmasters group meets on the first Wednesday on each month via Zoom. We are still welcoming new members. Being part of a Toastmasters group is a lot of fun and a great way to get to know people, as well as improving your communication and leadership skills. Please send email to sigs@aanr.com stating that you would like to be included in information about our club. You can learn more about Toastmasters at https://www.toastmasters.org/.

The AANR Education Foundation is pleased to announce the William Bisbee Scholarship Award funded by William Bisbee, a Montana resident who has been involved with social nudism throughout the United States for over 40 years. A one-time scholarship of $5,000 will be awarded to a student without nudist experience who must complete these steps: attend an AANR resort for 2-3 days and submit an experiential article on their experience: it will then be judged by the Education Foundation and the best piece will be determined as the scholarship winner. The chosen article will be published in the AANR Bulletin, the Undressed Press and the Naturist Hub. If the student secures publication in a national or regional non-nudist publication an additional $1,000 may be added to the award. Students of all majors are encouraged to apply, especially journalism, creative writing, sociology, philosophy, etc. For the application process and more details, please visit the Education Foundation website at aanr-ef.com