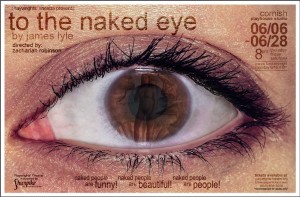 “To the Naked Eye” is a world premiere play by Seattle playwright James Lyle running at the Cornish Playhouse Studio at Seattle Center through June 28. Performances are Thurs-Sat at 8PM. The Thursday performances are audience clothing optional, and half price for those going nude. (As a friend said, “They’re paying ‘us’ to be nude? I’ll be there!”)

The play consists of six comedic vignettes that examine our perceptions around the meaning of nakedness. The play shows a positive and healthy attitude and doesn’t sensationalize or sexualize nudity.

The first and last stories together examine our reactions to nudity and the differences in our attitudes toward male and female nudity. These had originally appeared together as a one act play in 2010 entitled “Clothing Optional”, here parts 1 and 2. The favorite story for myself and several other attendees was “Art Therapy”, a group therapy session among five famous works of art, mostly nudes. It was wonderfully witty, and examined our feelings about being viewed and stared at, our feelings of inadequacy and body acceptance, differing views of attractiveness through the ages, shame, and judging people by appearance or by thoughts and ideas. Other stories examined love and attraction, nakedness and vulnerability, and the difference between seeing and imagining nudity.

The author writes “So it has always surprised me that we don’t see nudity more often on the stage, since theater is all about heightened emotions and powerful metaphors… It’s less usual that we get to watch real characters cope with the emotions that come with nakedness, whether seeing it or being seen, through action and dialogue. Naked people, after all, are people.”

The director, Zachariah Robinson, writes “… the deeper theme contained within the text challenges us as the audience to reconsider our common perceptions… Only by courageously allowing our vulnerabilities, flaws and imperfections to shine as brilliantly as our strengths, can we be free of judgment and insecurity and allow ourselves to truly experience the majesty of life.”

The actors are all great. I especially felt that Alexandra Novotny showed great contrast between two characters she played, one who was nervous and apprehensive but curious and intrigued when she encounters someone nude, and the other a confident, comfortable and amused nude.

The play is witty and funny, and takes a thoughtful look at a wide range of ideas and feelings about nudity and our bodies. As another attendee wrote, “the play is a must see.”

We attended opening night and the first clothing optional night and there was a definite difference in the feeling of the audiences. The clothing optional audience was actively enjoying the whole evening and laughing at the wit throughout. While that was generally true on opening night, there was also nervous giggling at times over the nudity, and they were a bit more restrained. The actors made similar comments and said that they really enjoyed performing for the naked audience.

The Cornish Playhouse Studio is the former Intiman Playhouse, at 201 Mercer St., Seattle. The Studio is the smaller venue, off the courtyard behind the main Playhouse. Make sure you’re in the right theater, getting tickets for the proper play, or you may reenact parts of the play when you undress in the lobby. Parking is available across the street in the McCaw Hall parking structure, and possibly on side streets to the north. There is also a lot at about half the price that’s almost as close, on the west side of Warren just north of Republican, under the Expo apartments. From there you can head down the walkway at Republican into the Seattle Center past the first building, and head left over to a staircase down to the theater.

One of the play sponsors is Seattle New York Pizza & Bar, at 5th & Roy, around the corner from the QFC, and about three blocks from the Cornish Playhouse. They have a deal for groups attending the play. They say to show the ticket stub but would likely honor the deal before the play if you tell them you’re attending.

To get advance tickets for Clothing Optional Thursdays

Send an email to tickets@playwrights-theatre.org with:
*Name
*Date of the show you wish to attend
*The number of tickets you need
*A Phone number where they can reach you.

They will give a call in the afternoon or evening and take a credit card over the phone. Tickets will be available at Will Call the night of the performance. Seating is open and begins at 7:30.

If you have questions or comments about the play or attending the clothing optional evenings, you can write to secretary@aanr-nw.org, or to the tickets@ address above.